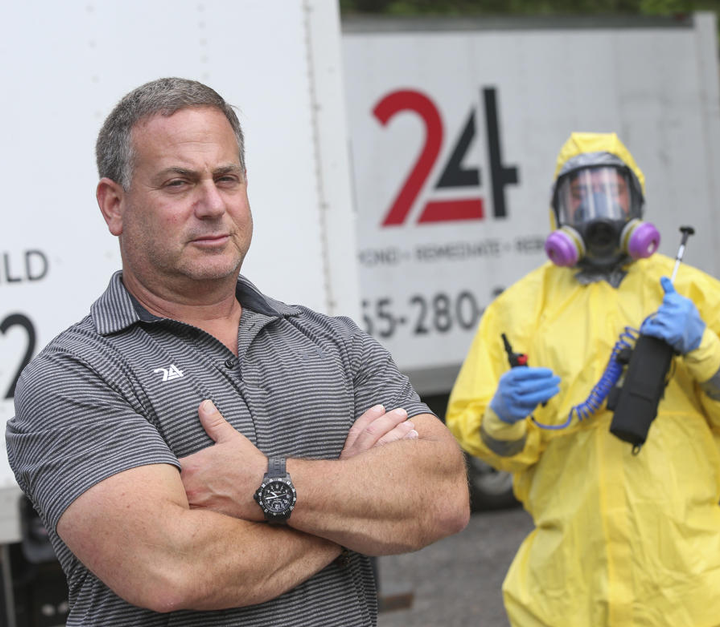 The tragic business of cleaning up deadly fentanyl overdose sites is booming — with calls flooding in for hazmat responses to hotels, schools, ball fields, public restrooms and even rental cars, where addicts have been shooting up drugs.

“It’s increased tremendously in the last 18 months and even more specifically in the last 12 months,” said Michael Wiseman of Easton-based Trauma Services, a commercial crime-scene cleanup service that now gets up to 10 OD cleanup calls a week.

Because fentanyl is so toxic that touching or inhaling small amounts can be deadly, the cleanup response requires sealed hazmat suits, gloves, booties and respirators.

I’ve been called to first-grade hotels in downtown Boston.“Anywhere you can imagine, there’s a good chance we’ve responded to it,” said Wiseman. He declined to identify businesses where they had done OD cleanup jobs.“Fentanyl doesn’t break down,” Wiseman said, “so it can expose any nonsuspecting person. It’s extremely lethal.”

One state senator is concerned about the threat OD scenes could pose to the general public. Sen. Richard Ross filed a bill that would require professional clean up after a suspected fentanyl-related incident. Ross could not be reached for comment yesterday.“It’s clear that highly trained people with all the right equipment is needed,” said Marshfield police Chief Phil Tavares, one of a number of chiefs who have voiced concern.

Police dealing with the aftermath of an overdose that could involve fentanyl are exercising extreme caution, donning protective gear and making sure they have naloxone, an opioid-overdose antidote, on hand.“We treat every scene as though there may be fentanyl,” said Chelsea police Chief Brian Kyes. “Do we always know if it’s fentanyl? No. But we have to be prepared as if it is.”Kyes and his department had an all-too-close encounter with fentanyl, as three police officers were exposed to the drug while responding to a crash scene. They were treated at the hospital and revived with naloxone.

“Fentanyl has arrived and it’s certainly very scary,” Kyes said. “We’re very concerned about the potential to lead to carfentanil, which is 100 times more potent than fentanyl.” Kyes said concern about cleaning public places is well-placed: “Often times you have an overdose in the bathroom of a restaurant and that particular restaurant is used by dozens of families.”

Though opioid-related overdose deaths dropped by more than 8 percent in Massachusetts last year, police and medical officials say they believe that is because of the widespread use of the life-saving drug naloxone — which has dramatically increased, leading authorities to believe the opioid crisis is not easing.

Naloxone was administered at a record pace last year, which appears to have contributed to the dropping number of overdoses. According to Boston Emergency Medical Service statistics, ambulance crews recorded 3,557 “Narcotic Related Illness” transports in 2017.

The latest report from the state Department of Public Health reveals there were 201 confirmed opioid-related overdose deaths in the first three months of 2018. The Legislature late last Tuesday night sent a bill to Gov. Charlie Baker that expands access to medication-assisted addiction treatment. The bill was passed unanimously by the House after the Senate approved it 37-0.